Lighting A Lamp And Cursing The Darkness

Posted on February 7, 2013 by Todd Battistelli 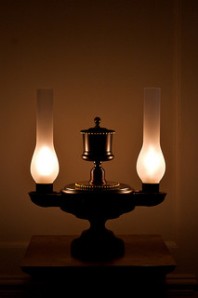 Religion Professor Stephen Prothero’s essay on the place of religion in politics exemplifies the muddled terminology that often accompanies state-church separation discussions that I consider in my research. Prothero’s argument also interests me for another reason. In advocating for the benefits of religious literacy, he runs up against a difficult question that rhetoric has considered for centuries.

To address the state-church language first, Prothero enacts a common slippage between the terms government and politics. He begins with an issue well within the category of state-church separation as delineated by the Free Exercise and Establishment Clauses of the First Amendment. Prothero rightly laments a religious organization violating federal law by endorsing a specific candidate. Religious groups can advocate for issues but not candidates. He makes a compelling case that this law draws a distinction without a difference, as advocating for particular issues clearly affiliates a church’s endorsement with one candidate.

The problem in terminology is when Prothero links this legal violation with “religion in politics,” “strict separation[]” and “church/state questions.” The legal issue is a matter of state-church separation. But “religion in politics” encompasses a far wider array of activities, such as citizens, even elected officials, explaining how their religious beliefs inform their positions on issues of the day.

The Establishment Clause demands that our laws remain neutral with regard to religion. It does not demand that citizens withhold or even moderate their religious viewpoints when discussing those laws. Religious arguments make for difficult debates, as they invoke mutually contradictory absolutes (of course non-religious arguments involve the same risk, though perhaps at a lesser freqency). So, I’m sympathetic to the Rawlsian position that if people wish to argue a position at which they arrive through religious beliefs or other “comprehensive doctrines,” they should then translate into arguments with which all fellow citizens can engage. From a pragmatic position, however, I don’t see such an outcome as likely. Incompatible comprehensive doctrines have always been with us and I suspect they always will be with us. Instead, I hope that citizens would share their viewpoints and arrive at laws that neither favor nor disfavor religious views.

Some activists have portrayed the pursuit of neutrality as hostility toward religion, arguing that those in favor of strong state-church separation are hostile to “religion in the public square.” This is why I’m always dismayed to see arguments that fail to distinguish between matters of state (law) and religion and matters of politics. It opens a space for people like Texas Governor Rick Perry to bemoan an effort to restore neutrality as an attack on one variety of Christianity that restricts their voice in the public, political square. The hostility argument is rhetorically potent, inspiring strong support among those who wish to preserve the unjust state privileging of their religion, but it also undermines a proper understanding of state-church separation questions.

Of course, people contest what exactly is meant by “a proper understanding,” and that brings me to my second point about Prothero’s argument in favor of religious literacy. He suggests, “If U.S. citizens know more about the Bible, would politicians still be able to get away with simplistic (and often erroneous) claims that their views on abortion or capital punishment or tax policy are ‘biblical’?” I suspect that, yes, politicians and their audiences would still vigorously pursue religious arguments to support their positions. Those arguments may be more complex, but they will still be as acrimonious and as inimical to compromise as our arguments today. The Bible, like any text, yields multiple readings. “Erroneous” is often in the eye of the beholder, and even when textual evidence might support one reading, the lenses of ideology can easily dismiss that evidence or turn it against itself.

The same goes for civic literacy. I hear and feel the appeal of the hope that if only we knew more facts, if only we knew how to debate the in the “right way,” we’d avoid some of our difficult dialogues and deliberate better. And we would, but only to an extent. More knowledge is always better than less. But knowledge alone will not suffice, because the matters of rhetoric, the questions of civic debate, are ultimately not knowable in any absolute or final sense. Take, for example, the contradictory judicial arguments on issues of religious liberty. Despite possessing considerable knowledge and experience, judges do not agree on the interpretation of two short clauses in the First Amendment as evidenced by repeated split decisions from the Supreme Court.

I don’t raise this argument to dismiss learning as futile, but I do want to highlight another dimension of our rhetorical situation. In his dialogue De Oratore, Cicero considers the tension between knowledge and disposition. Crassus believes that rhetors require expansive knowledge to speak persuasively. He says that “unless the orator has fully grasped the underlying subject matter” the most sophisticated persuasive speech will elude the speaker (May and Wisse translation 70). His interlocutor Antonious, noting the limits of human knowledge, prefers to emphasize rhetors’ ability to get the feel of their audience, to adapt to the situation in which they find themselves, and he cautions that pursuit of knowledge can in some cases impede persuasive speaking. Antonious says that the kind of comprehensive knowledge of which Crassus speaks “is a difficult thing to accomplish” and that “there is a real danger of being drawn away from the popular way of speaking that we normally us in the forum” (75).

This question of a “way of speaking” is more than a matter of style. Academic discourse differs in substantive ways from political discourse. Even if we grant that knowledge (i.e. literacy) can produce some level of coherent interpretation when it comes to a text like the Bible or the Constitution (and I think that that level is quite limited), political debate can run roughshod over our carefully honed knowledge.

Ultimately both approaches should work together. Knowledge should combine with lines of argument likely to engage an audience. Unfortunately, some lines of argument that audiences find particularly engaging (such as the hostility narrative) disrupt efforts to converge on the common understanding demanded by a literacy approach, and they require a response that goes beyond appeals to fact.

Rhetorician and writing teacher. Keeping an eye on the state of civic discourse.
View all posts by Todd Battistelli →
This entry was posted in Civic Rhetoric, State-Church Separation, Uncategorized and tagged Cicero, civic rhetoric, religion, rhetoric, state-church separation. Bookmark the permalink.
%d bloggers like this: